Three weeks less was more – The #NewCheapNature campaign is coming to an end
December 15, 2022

The campaign was carried out as a cooperation between students of the master’s program “Sports-, Culture- & Eventmanagement” of the FH Kufstein Tirol, the artist Richard Schwarz and the cultural associations openspace.innsbruck and Novo Kulturno Naselje, as part of the EU project Magic Carpets. It focused on different aspects of sustainability and used the interactive features of the Instagram platform to encourage participation. Initially low-threshold and primarily informative, the campaign increased to its climax: the call to the public to send in pictures of their own ‘good old’ T-shirts and share the stories that went with them.
A call for more sustainable living in everyday life

Life in a consumer society is characterized by the consumption of resources that we ourselves or others create. The campaign drew attention to this everyday reality and showed ways to make our own lives more sustainable.
The campaign began with a seasonally appropriate theme: Christmas. Here, among other things, suggestions were provided for more sustainable gifts and also their packaging. Next, the campaign focused on the aspect of nutrition. For example, seven substitutes were presented that help to make everyday cooking more sustainable. This was followed by information on the topic of technology, such as this sobering figure: 160,000 laptops are thrown away every day in the European Union – of which 70 percent could be reused. The theme, which also led to the campaign’s finale, was fashion. Aspects of manufacturing, distribution and recycling were highlighted. Here there were useful suggestions on how to rediscover and reuse old clothes, and information on the impact of the fashion industry on the environment.
“Tell us your story!”

The highlight of the campaign was December 8, Mary’s Conception, a holiday on which stores are allowed to be open. The campaign used this date to invite the public not to buy anything new but instead to look into their own closet. Wanted were ‘good old’ T-shirts with personal stories that tell of emotional value. Each of these garments becomes an advertisement to appreciate what is already there instead of buying something new. The photos of the t-shirts were posted together with the respective story in the story of the openspace.innsbruck account. The age was also used to calculate how much water the wearing of the t-shirt saved, since it was not replaced by a new one. Currently, 25 entries have been collected.

The stories that were told about the entries are particularly impressive. From funny, exciting to heartwarming anecdotes, everything is represented. These stories show the value of reusing “old”: The memories we associate with these pieces are something unique and very special.
Those who would now like to follow the campaign in retrospect are invited to stop by the Instagram page openspace.innsbruck. Here you can find all the posts as well as the story highlight called #NewCheapNature. 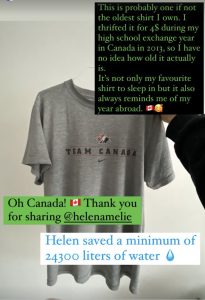 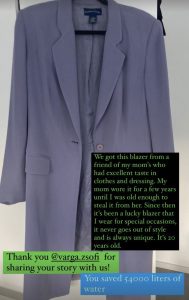